If you have a bench top power supply that can put out ~40A at 12V, awesome. I wish I had one. They appear to be super expensive when getting into that kind of current. If you don’t have one…

I really didn’t have much of an idea what I was doing when I started this. Of everything, I imagine this would be the piece that I would change the most if I were to do it again. Part of that is because I could have gotten more bang for my buck, part of that is because I imagine it was wildly unsafe the way I did it. This was all motivated by being a bit cheap, and I’m not confident this was the right place to save money. I’ve used the power supplies since though, so it’s not a write off.

Note: This PSU *had not* been used, at least since it left the factory. There are some reasonably large capacitors inside, so be careful with those. Definitely don’t plug in the power supply before disassembling, and if it is disassembled either let it sit for a day or two or manually discharge the capacitors (into something other than yourself).

Cut everything open then close it back up again

Figure out what the voltages are, either the easy way or the hard way. The hard way would be to strip one of each wire, figure out how to turn the PSU on, and test everything. Easy way – look up a color scheme online. Here’s a pin out for an ATX power supply, copied entirely from uzzors2k.4hv.org.

Or summarized (not really sure where I got this from)

The only tricky thing here is that power supplies can cheat a bit. For example on mine, yellow is different from yellow with a blue stripe. That tripped me up for momentarily. If you’re doing this, make sure you take a quick headcount to ensure you haven’t accidentally confounded two separate voltages.

In this instance, all I care about is the ground (black) and the +12V (yellow) – the -12V line can only put out 0.3A, so if you’ve got your leads backwards when you’re checking this it’ll become pretty obvious pretty quickly. This is one of the boneheaded mistakes that I didn’t make, but I thought about it…

This is where it starts to get cringe-y. I would suggest doing a better job than I did, so you don’t burn down your house or anything. Probably it doesn’t need to be said, but I have no idea what the best practices are for something like this. Given a whole bunch of small gauge wires, how do you make one big gauge one? This worked for me – group the recommended number together into crimp terminals, then group the crimp terminals together on something else. I went with banana jacks because they sound hilarious.

Wind them together a bit

Slip some heat shrink tubing on

Throw a ring crimp terminal on there and crimp away

Slid the heat shrink tubing back up

So, at this stage I theoretically had 40 amps at +12VDC available. Perfect for powering the chargers! One last thing though.

If you don’t do this, the PSU won’t put out anything at all. This is the magic “turn PSU on and solve your mysterious problem” step. If it weren’t torn open, this would likely be connected to a switch.

What I wish I had done

I think it would have been a better idea to get all the female connectors I needed, and just plug the PSU into a homemade breakout board. One step even better than that would be to realize that I’m not the first person who’s ever wanted to use an ATX power supply and do even 5 minutes of online research. I really couldn’t see the forest for the trees on this one. Products like this exist (for less than 15$): seeedstudio ATX breakout board 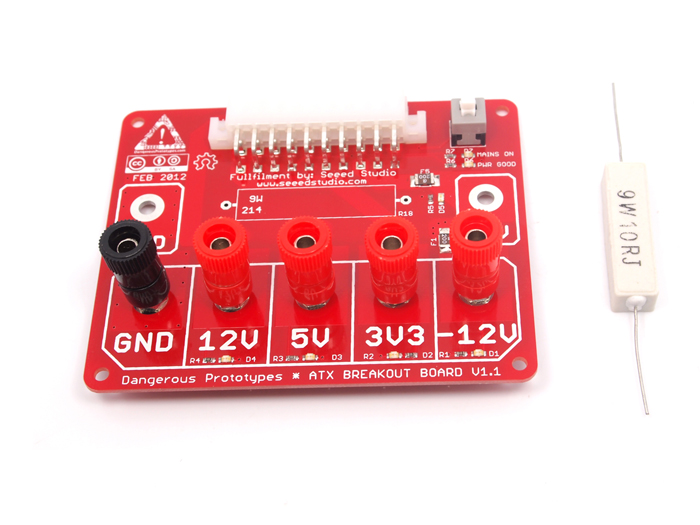 That said, most of the products I looked up after seemed to be in the same domain as bench top power supplies – the rated current is far below what I was looking for. Next time, I guess…