This is the z-height calibration model from the Prusa forum (source below). While the number is somewhat arbitrary (as in the values will mean nothing for a different printer) it represents the distance from the PINDA probe to the print bed, where a higher number means the nozzle should be closer to the bed. These images spans from “not even making a layer” to “too close to extrude”. This is printed in ~3 year old red M3D 3D Ink PLA. I was having trouble with bed adhesion, so I figured it was worth it to go all out and give this a shot. All 4 prints are identical everything except for z-offset. Source: https://shop.prusa3d.com/forum/assembly-and-first-prints-troubleshooting-f62/life-adjust-z-my-way-t2981.html

A bit of an angle shot to hopefully show off some of the texture differences. You can kind of see that at 775 it’s starting to look a bit off, and at 925 it’s similarly starting to look off.

Held up against the light, you can really start to see what looks like under extrusion on the 775 side. This is not under extrusion, this is the nozzle being too far away from the bed and not squishing down enough. The unsquished filament leaves gaps all over the place and is obviously not ideal. 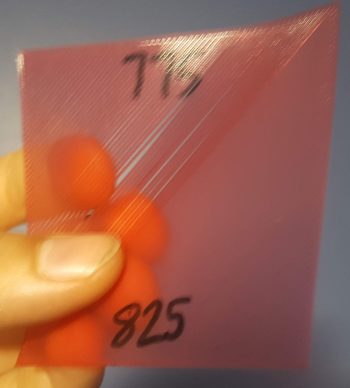 This is attempting to show that at 775 adjacent rows aren’t even attached to one another. It’s a bit hard to see in the photos, but it’s super obvious in real life. While the layer is smooth and consistent, it’s just not attached.

Looking closely (775 on the left, 825 on the right), the gaps are more obvious. Additionally you can see the tiny areas of missing filament where the 825 lines meet the border. If everything else were perfect, this would be under extrusion, but in this case it is the nozzle being too far away and not squishing enough.

Both 837 and 850 look pretty solid to my eye. 837 is a tiny bit more smooth to the touch, whereas 850 has just a tiny amount of texture going perpendicular to the filament path.

Both look reasonable to me, there’s just the faintest hole right at the very edge where the 837 meets the border, so I would favor 850 on this one. 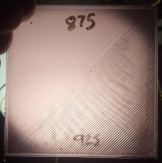 Excuse the dirt (that’s not part of the print), this is where it starts to get interesting for me. I’ve run prints failing because the nozzle was too close, and 925 is _just_ starting to show the symptoms of that. It’s relatively minor here, but extremely noticeable next to the fine-looking 875. The 925 side is rough to the touch and is showing inconsistent filament paths – it alternates from thick to thin to thick. While overall it’s not awful (it’s all one piece, the layer height is reasonably consistent, it would probably be fine by the second layer, the bed-side still feels smooth), it’s obviously not perfect. 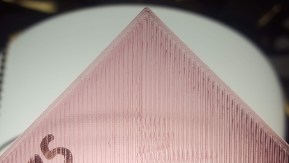 The corners are closed in nicely, but you can see where the 925 side has started to interfere with itself, creating tiiiiiny little ridges. You can also see the inconsistent filament pattern towards the middle. 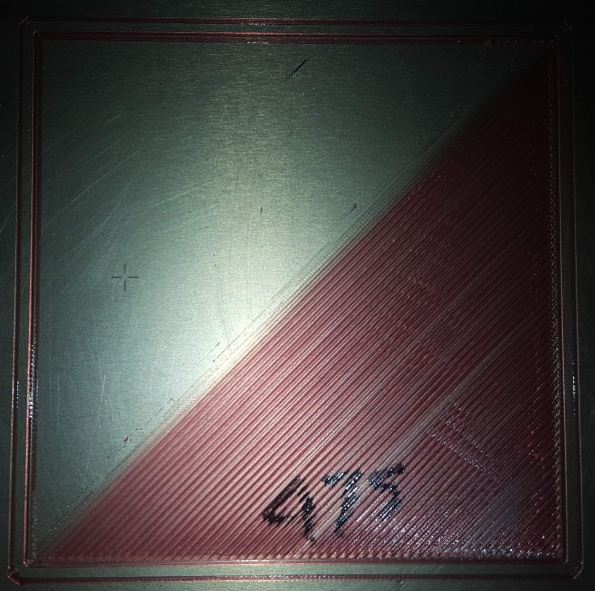 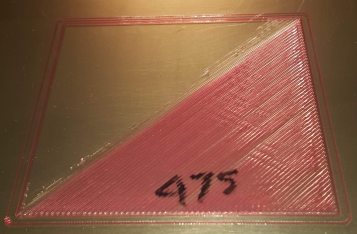 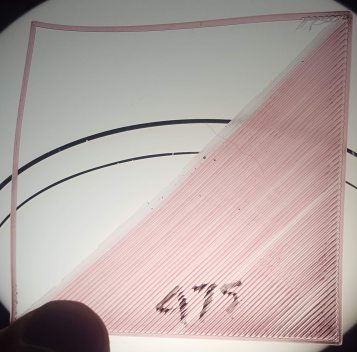 Excuse the dirt and the dog hair… This is 975 and 1025. Admittedly I stopped the 1025 side because the extruder jammed and it wasn’t getting any better. While it’d be silly to set the z-offset so close that filament can’t come out, the 975 is a tiny bit more subtle. It’s actually _more_ smooth than the previous 925 side, the filament diameter is more consistent along the path (whereas the 925 was blob then thin then blob). It’s much less consistent in terms of layer thickness though. You can see, for example, the two or three lines that go through the bottom of the 7 and the top of the 5 – they’re _super_ thin to the point of almost not being there. Additionally in the bottom right corner you can see the quick back and forth movement overlapping and creating ridges.